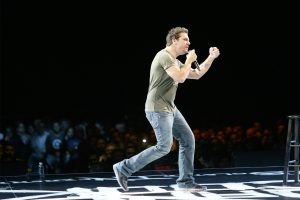 Metro Comedy Entertainment is the perfect change-making ambassador that organizes stand-up comedy tours in the US.

An entertainment tour in 40 US cities each year that combines household comedians, high-profile DJs and celebrity appearances

The clients of our tour

All types of customers; preferred clients will typically be young couples and mid-age population. This group is more likely to make the comedy events a regular staple. Often, individuals seek out comedy clubs that have a history for showing some of the best talent.

In 2020, the entertainment and media market in the United States is expected to be worth over 720.38 billion U.S. dollars.

Comedy is the most popular podcasting genre, followed by education and news

Metro Comedy (The Promoter) is currently offering an investing opportunity into our nationwide comedy tour. Well known comedic talents coupled with a plethora of celebrity appearances, all bound together by the pumped-up grooves of an iconic celebrity DJ. These 40 cities, six-month, money printer is slated to begin breaking the internet in the Spring of 2020. In addition to laughing with glee at the idea of being an architect of this extravaganza, you’ll be laughing all the way to the bank with a 20% profit return on your investment, before the tour is even over. Interested in how? interested in Who? Interested in when? Contact us.

An investor that provides funding for the tour will receive their investment principal, plus agreed percentage of the investment.